Sanremo is a famous seaside resort city in the Imperia province of Liguria about 20 miles from Italy’s border with France. It’s know for its casino and Annual Italian song festival, Festival della canzone italiana di Sanremo, held in February.

The flashy life in Sanremo is easily escaped by a quick stroll through a gate that takes you up the Pinecone, La Pigna the locals call it, through the somewhat gritty medieval section of the city to the Madonna della Costa Sanctuary, the symbol of the city from which you have fantastic views of the lower town and port.

The good news for potential visitors to Sanremo is that the summer isn’t normally terribly hot, and the temperatures, even in January are quite moderate. Let’s look at the historic climate of Sanremo.

For my money, the best times to go are the shoulder seasons: April through June and September through October. We’ve always had great weather in those months, and sometimes some interesting cloud formations as well.

January through March, and October through November are the rainiest times in Sanremo, but the precipitation is manageable; there are no months when it’s excessive. 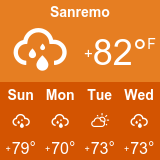 Commenting is closed for this article.